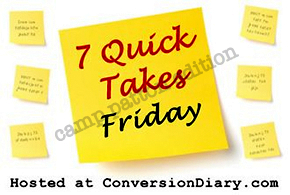 1. Yes, I know I missed a lot of posts this week but I've been very busy.  Doing what? You haven't told us what you did this week in the course of posting!  Well, let's start with Monday.

Monday, my daughter had a sports banquet to attend and there was  a cub scout meeting and that same daughter decided she needed a new outfit for the occasion about two hours before launch time.  Explaining the improbability of success did not deter.  Dropping her off, her dad came later to watch the ceremony and I rushed off to cub scouts.  I do not like evening activities away from the home.

2.  Tuesday:  My son comes to show me his shoes. They have been worn to the point of having holes. He is running 3 to 5 miles a day.  We make a run out in the evening to get shoes.  I also fold a zillion pieces of laundry.  Not fun.

3.  Wednesday: Event for me!  Tracy Beckerman launched her book, Lost in Suburbia!  She invited me and other DC bloggers to a Blow Dry Book Launch and Bar Tour.  It was loads of fun.  I met a ton of really interesting ladies and got my hair done.  Of course, I had a bit of adventure when I came out and felt like I wasn't quite sure which way my car was...how do you lose a 12 passenger van?  I'm walking the streets of Bethesda pushing the panic alarm of my car keys hoping to get it to add to the ambiance of city life. I did eventually get my bearings and find it sans the noise maker, but it was a comic if slightly unnerving few minutes.

4.  Thursday:  Catch up on paperwork day.  Remember there's an award ceremony in the evening. Scramble to get dinner on the table and leave.  Did make it for daughter's award. Did bring 4 year old (he looked spiffy) with me.  A woman came up to me to introduce herself.  Commented that the 4 year old must be why she didn't see me around the school given the involved nature of my daughter.  I explained he was one of 10 so I was pretty (this week excepted) homebound.  She responded, "I didn't know she was from THAT kind of a family."  Paul was playing floppy dead toddler with my arm so I decided it was time for a cookie for both of us rather than asking what "THAT" meant.

5.  Friday: Driving to College Park to pick up son's things but not son.  (There is something wrong with this scenario).  Taking daughter who is going to a GIRL'S slumber party to a store because she doesn't have anything cute to wear.  It's a girl's slumber party! Who are you trying to impress?   What am I doing enabling this behavior?  Extortion...that's what.  The things I do to get the bribe of a cleaned basement.

6. Other things: Made a pitch (and it was accepted) to write a piece for December Catholic Digest.  Yes, I'm doing the happy dance.

7.  Had panic attack about Helen.  We're two weeks from launch and I have come to know, I really don't know how to market/launch a book.  I've learned how to make the pitch in person, but don't know the process of selling a book.   Honestly, I'm more interested in writing the next one.  Speaking of which, found this great tree as part of the inspiration for the Book of Penelope. It's a 1,500 year old (at least) olive tree.  I've made it my screen saver.  The idea that there is a tree in Ithaca --which I had created in my mind before discovering it actually exists, just fills me with wonder. 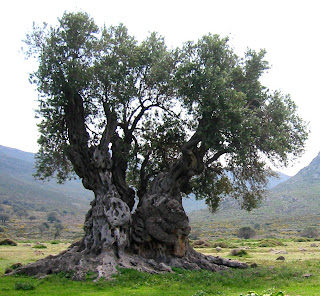 It seems like a perfect place to sit and feel both very alive and very short lived at the same time, a place to go and store secrets and yell at the universe when everything feels just too unbearable.  (Yes, Penelope will do all these things in this tree).
Posted by Sherry at 8:44 AM

Love the tree. Coco absolutely loved all trees.
Thank heaven you survived the week. And thank you for your many gifts. Your family tree now resembles
the Penelope tree. Love you, Mom